Approximately one million Australians will purchase cryptocurrency for the first time over the next 12 months — bringing total crypto ownership in the country to over five million — according to a newly released survey.

The findings came from the second Annual Australian Crypto Survey by Australian crypto exchange Swyftx, which was conducted by research firm YouGov.

The survey questioned 2,609 Australians over 18 years of age in early July, with 548 of the survey sample identified as current holders of cryptocurrency.

The report stated that despite the current “Crypto Winter” which has seen approximately $2 trillion in assets wiped from the digital assets market over the course of the last year, Australian crypto ownership has grown 4% year-on-year, reaching 21% in 2022.

According to the report, this figure is set to increase by another one million new crypto owners in 2023, while at least one-quarter of Australians are planning to buy crypto over the next 12 months, with Millenials, Gen Zers, Aussie parents, and those in full-time work most likely to buy. 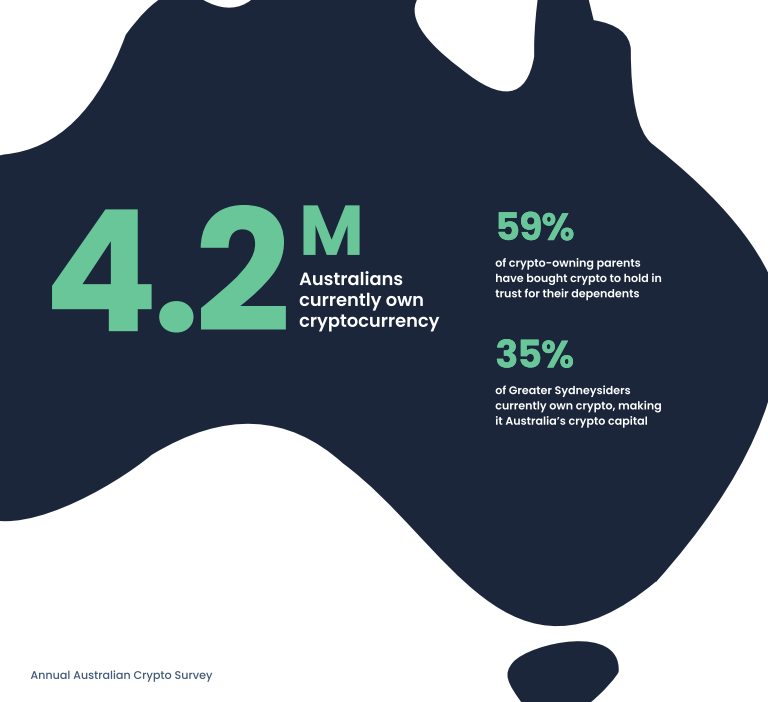 This finding is broadly in line with recent data from a bitcoin processor suggesting the crypto winter isn’t holding back widespread adoption and comments from crypto exchange CoinJar’s head of content Luke Ryan claiming that sports sponsorship is helping legitimize crypto in Australia.

“On the basis of current growth trajectories in the use of digital assets, we expect half of the adults under 50 in Australia to own or have owned crypto within the next one to two years.”

However, Honan said there were also a lot of variables that make forecasting adoption "fiendishly difficult," adding:

The expectation is that we’ll see crypto move into the regulated space next year and, all other things being equal, you’d expect that to trigger growth in adoption, but it isn’t a given.

Honan said the rate of adoption may slow over the next 12 months before recovering again as market conditions improve.

“The bear market has knocked confidence […] Confidence can take the stairs up and the lifts down, so we are going to have to wait and see how quickly the market takes to stabilize," he noted.

According to the survey, lack of sound regulation was revealed as the biggest deterrent to investing in crypto for those who have not yet done so, along with a lack of knowledge about how crypto works, and overall market volatility.

This finding is reinforced by recent comments from the former head of risk at Credit Suisse CK Zheng, who believes the next crypto bull run will be a result of “regulatory clarity” in the United States.

In a comment to Cointelegraph Swyftx co-CEO Ryan Parsons said the report shows there's clear demand among Australians to purchase and use crypto, but that a "material factor" for crypto hesitancy remains regulation.

The drumbeat for defined rules is growing and it will continue to grow if adoption of digital assets increases at its current rate. As this report shows, there’s clear demand among Australians to purchase and use crypto. It is imperative we meet this demand responsibly.