Bitcoin price has produced three consecutive lower lows since September 7, but at the same time, the Relative Strength Indicator (RSI) has shown a positive rise demonstrating a lack of underlying bearish power. This lack of confirmation indicates a possible reversal is in sight, and BTC has started to climb higher, but it still faces one of the biggest hurdles and only by overcoming it will it confirm a short-term shift in regime favoring bulls.

Stablecoins under fire from US watchdogs

While technicals are struggling to develop a firm bias, regulators in the US have taken a serious approach in culling algorithmic stablecoins after the recent collapse of Terra/LUNA that sent shockwaves in the crypto ecosystem.

The House of Representatives Financial Services Committee (FSC) has targeted stablecoins such as DAI, FRAX and USDD and proposed a bill that could put a two-year ban on these assets. The reason for this bill can be traced back to the collapse of the Terra-LUNA ecosystem in the second quarter of 2022.

In this regard, Rep. Warren Davidson stated,

There's an outside chance we find a way to get to consensus on a stablecoin bill this year.

While there is a war on stablecoins, Tether, one of the largest issuers of stablecoins, came under fire this week as Katharine Polk Failla, a U.S. Judge in New York, ordered the company to produce documents confirming that all the issued USDT is backed with US dollars.

Regardless of the regulatory mayhem, BTC is slowly trying to regain momentum and needs to overcome one crucial hurdle to jumpstart its uptrend.

Bitcoin price and its technical woes

There are two things investors should pay attention to:

If both these conditions are met, then Bitcoin price would be primed for a move higher. In such a case, BTC will face a significant resistance confluence consisting of the $20,737 resistance level combined with the declining trend line connecting the swing highs since May 31.

Clearing these hurdles will not be easy, but it will be necessary to open the path to retest and sweep the previous weekly high at $22,850.

Beyond this level, market participants should shift their focus to August’s high at $25,200. This level is significant since it contains the midpoint of the $32,427 to $17,593 range at $25,010. A retest of this level could create a local top for Bitcoin price. 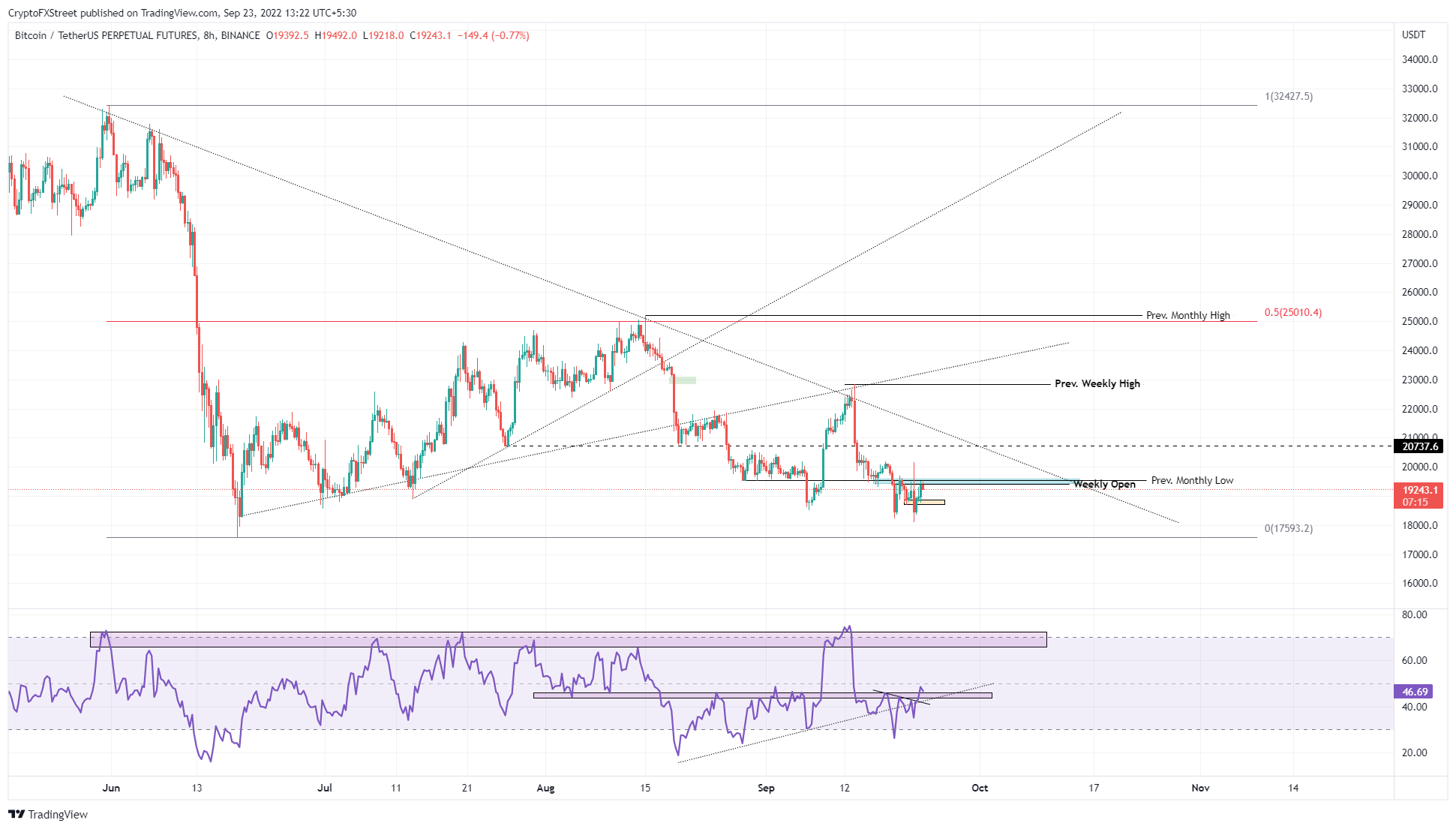 IntoTheBlock’s Global In/Out of the Money (GIOM) model supports this rally in Bitcoin price. This indicator shows that the immediate support level, extending from $9,600 to $18,470, is not as strong as the resistance level but is capable of producing a bounce.

This resistance cluster coincides with the targets mentioned from a technical perspective, adding more credence to the possibility of a bounce.

However, investors should note that a move into the said cluster could result in a sell pressure from these underwater holders who would want to break even.

Another interesting metric that promotes this bullish narrative is the on-chain volume, which has been on a steady uptrend. After dipping to 16.39 billion BTC in the first week of July, it has steadily surged to where it currently stands, 41 BTC. This uptick indicates that more investors are interacting with the BTC blockchain, and hence there is an increase in capital inflow, which is a bullish sign depending on the market structure.

While things are looking up for Bitcoin price, investors should be prepared for a whipsaw scenario which would include a sweep of the June 18 swing low at $17,593. This move would be a good opportunity to buy if BTC recovers and sustains above this level quickly.

However, a daily candlestick close below the said level that flips it into a resistance level will invalidate the bullish thesis. In such a case, Bitcoin price could crash to $15,500, which is the next stable support level.

If the selling pressure continues to spike, the big crypto could trigger a sell-off to $13,500 and $11,989, where a macro bottom for the bear market could form.