Fed’s Daly: There are signs that the economy is cooling

PM568 > Forex News > Fed’s Daly: There are signs that the economy is cooling

Federal Reserve's Mary Daly, president and CEO of the Federal Reserve Bank of San Francisco, was interviewed on Face of the Nation and said there are "signs that the economy is cooling, it just is going to take some time for the interest rate adjustments we've made to work their way through."

The following is the transcript:

MARGARET BRENNAN: We turn now to the state of the economy and the president of the San Francisco Federal Reserve Bank, Mary Daly.

Good morning to you.

MARGARET BRENNAN: The San Francisco Fed said fiscal spending during the entirety of the pandemic, all the congressional funding, contributed 3 percent — a 3 percent hike in inflation.

Do you expect the congressional bill that's about to pass to add to inflation as well?

MARY DALY: Well, let's remember that, during the time that there was this fiscal relief during the pandemic, there was also monetary policy relief. And those were things necessary to get us through the pandemic.

So that's why that was such an important component. And history will be the judge whether it was too much or too little. But, right now, that's where that was. And my staff have evaluated that.

When I look forward, there are so many things going on in the economy right now, both domestically and globally. And we are struggling with high inflation. But the Fed is committed to bringing that down. And we're looking at not only things that Congress passes, but also what happens across the entire world.

MARGARET BRENNAN: So, do you think this bill will add to inflation? Has inflation peaked? Can you say that?

And it's really hard to tell, because all the details haven't been worked out yet, and — or the time frame in which those things will take place.

MARY DALY: So, right now, I think the most important thing, Margaret, is that inflation is too high, and the labor market is strong. The global economy is struggling with ongoing high inflation. And that's what I'm focused on.

MARGARET BRENNAN: You are a labor economist.

We had this surprisingly strong jobs number on Friday. Why was it so surprising? What was it that economists missed here? What was your takeaway?

You know, it did surprise everyone who tries to figure out exactly what the number will be. And we were — you know, a number of projections were well off. But, frankly, if you're out in the communities, if you're traveling anywhere, you're just going in your own community, I don't think consumers or workers or businesses were that surprised.

There's help wanted signs all over the place. People can find multiple jobs if they want them. Search times for jobs aren't that long. So I think the labor market is continuing to deliver. It just tells me that people want to work and that people want to hire.

MARY DALY: The universal truth is that inflation's too high.

MARGARET BRENNAN: But does it still — or does it indicate that recession is not where we are or where we're going?

MARY DALY: If you're out in the economy, you don't feel like you're in a recession. That's the bottom line.

The most important risk out there is inflation.

MARY DALY: And I think the job market just confirms that.

We're going to take a break and come right back with you.

Mary Daly, stay with us. We have more questions.

MARGARET BRENNAN: We will be right back a lot more Face the Nation, including more with Mary Daly.

MARGARET BRENNAN: Welcome back to FACE THE NATION.

We continue our conversation now with the head of the San Francisco Federal Reserve Bank, Mary Daly.

In that jobs number on Friday, we also saw that wages rose, but they're not rising as quickly as inflation is.

How concerned are you that that shows inflation is really becoming embedded in the economy in a way that is really going to force your – your colleagues at the Fed to continue to have to hike rates?

MARY DALY: You know, I don't see inflation as embedded in the economy. The kinds of things that we would worry about just not being able to correct easily.

What I see is supply and demand are just unbalanced. About 50 percent, by my own staff's estimates, of the excess inflation we see is related to demand. The other 50 percent is supply.

The Fed is really well-positioned to bring demand down. And we already see the cooling forming in the housing market, in investments. So, I do see signs that the economy's cooling. It just is going to take some time for the interest rate adjustments we've made to work their way through.

MARGARET BRENNAN: So it would still be appropriate to raise rates in September by half a percent?

MARY DALY: Absolutely. And, you know, we need to be data dependent. It could — we need to leave our minds open. We have two more inflation reports coming out. Another jobs report. We continue to collect all the information from the contacts we talk to, to see how this is working its way through the economy.

But you mentioned, you know, wage growth a little bit above 5 percent. Inflation, last print, at 9.1 percent. Americans are losing ground every day, so the focus has to be on bringing inflation down.

MARGARET BRENNAN: One of the things the Fed can't control is geopolitical risk. How concerned are you about what is happening in the Taiwan Strait right now?

MARY DALY: Well, there's so much going on globally. And I think that's really something that we need to think about. It's just getting through Covid, making sure the new variants don't derail economic activity. We have central banks across the globe raising interest rates to try to bridle their own inflation. And we have ongoing developments that take place, you know, geopolitically or just more generally among countries. And all of those things, the war in Ukraine, all of those things create headwinds, if you will, for the U.S. economy. And we're going to have to lean against those headwinds for growth while we bridle inflation.

MARGARET BRENNAN: The Fed has its work cut out. And I know we'll be talking again.

Thank you very much, Mary Daly.

US dollar and yields update

The US dollar and yields rallied on Friday, recovering from the sharpest daily drop in more than two weeks, following the Nonfarm Payrolls blockbuster report. The US dollar index (DXY), which measures the greenback against a basket of currencies, rallied to a high of 106.93 after sliding 0.68% on Thursday, the largest fall since July 19. It remains around 2.5% below its mid-July high. Meanwhile, the US 10-year treasury yields have rallied from the daily chart's broadening formation's support as markets reprice Federal reserve interest rate expectations following the NFP report: 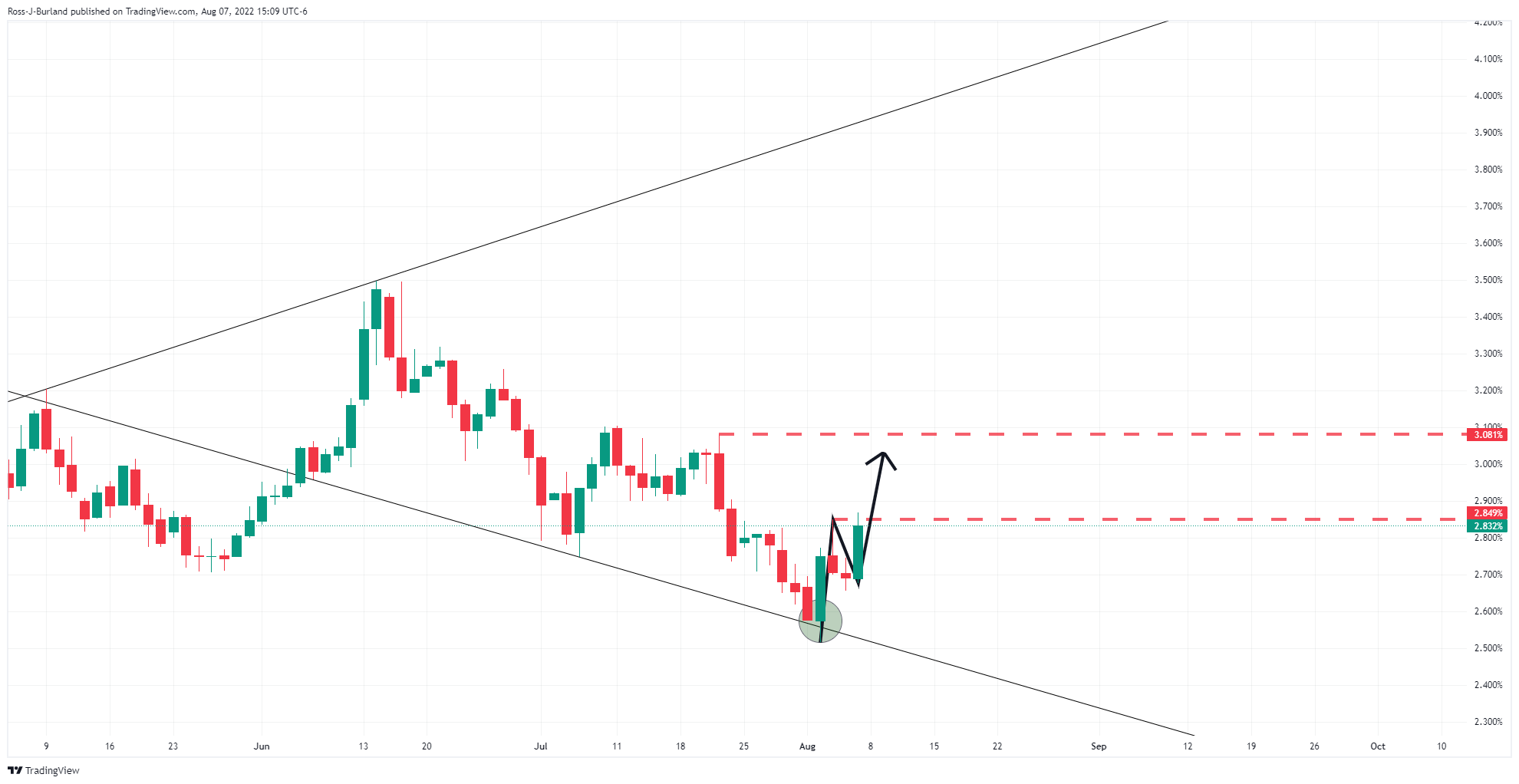