The gold price is back to flat on the day as the US dollar comes back up for air. At the time of writing, XAU/USD is trading at $1,749 after falling from a high of $1,755.94. The yellow metal has been as low as $1,742.51 on the day. The theme of the day centres around the Federal Reserve and US data, driving the direction of the US dollar and yields.

The US dollar gained against a basket of currencies on Wednesday, holding near a 20-year high as investors waited for a Friday speech by the Federal Reserve Chairman, Jerome Powell. Investors are looking for insight into how aggressive the central bank will be in its plight against inflationary headwinds. The greenback has been pushed and pulled in everchanging sentiment as to whether the Fed could will be in a position to curtail its rate hike path in the face of inflation that remains at 8.5% on an annual basis, far exceeding the Fed's 2% objective.

US data, in this regard, is what counts. The first round of data that moved the needle in financial markets came in yesterday's report that showed US private sector activity contracted for a second-straight month in August. The S&P Global flash composite purchasing managers index (PMI) for August dropped to 45 this month, the lowest since February 2021, as demand for services and manufacturing weakened in the face of inflation and tighter financial conditions. A reading below 50 indicates a contraction in activity.

However, the dollar regathered itself on the back of a jump in US yields following a bullish 2-year Treasury auction. The demand from domestic and international buyers was far below a 6-month average which led to a rally in the 2 and 10-year yields, supporting the US dollar and weighing on gold prices. The greenback recovered from a touch above 108 the figure as per the DXY index all the way to 109.11 highs over the course of Asia, Europe and early New York session.

Data on Wednesday also showed that new orders for US-made capital goods increased at a slower pace in July from the prior month, suggesting that business spending on equipment could struggle to rebound after contracting in the second quarter. However, the move in the greenback to the downside did not come until around the London fix. We saw a sharp sell-off which lifted the price of gold momentarily. However, US yields remained firm which ultimately lead to the price of the yellow metal's decline again and has enabled the greenback to recover some ground as we progress through the US session.

Due to the less inflationary data, Fed funds futures traders are pricing in a 59% chance that the Fed will hike rates by another 75 basis points at its September meeting, and a 41% probability of a 50 basis points increase.

Will the Jackson Hole be a big letdown?

For the rest of the week, Thursday's Gross Domestic Product, Initial Jobless Claims and Personal Consumption Expenditures will be key ahead of the speech by Fed chair Powell at 10.00 ET Friday. In the past, the Fed has used this symposium to announce or hint at policy shifts. However, analysts at Brown Brothers Harriman argued that they do not think the Fed will paint itself into a corner ahead of the September 20-21 FOMC meeting. ''Rather, we expect the Fed to try and manage market expectations by maintaining the hawkish message it has perfected since the July FOMC meeting.''

The analysts note that between now and the September FOMC, all the major August data and some of the early September surveys such as the preliminary S&P Global PMI readings and regional Fed surveys will be released. ''The Fed will also have a better idea of how the economy is doing in Q3''

Those gold bugs holding out for a bearish narrative for the US dollar and yields pertaining to recently less inflationary data could be left disappointed in the case that Powell doesn't push back on hawkish sentiment.

"The dollar's still well bid and I think that the market's concluding that these data are not going to change the Fed's position about what's going to happen next month," said Marc Chandler, chief market strategist at Bannockburn Global Forex in New York.

"While the market might be swinging back and forth between inflation and recession, the central banks aren't. They are focused, it seems to be nearly exclusively, on inflation," Chandler said.

As per the prior analysis, it was stated that the price of gold had left behind an M-formation on the daily chart. This is a reversion pattern that put the spotlight on the support near a 38.2% Fibonacci around $1,755:

As illustrated, the prior analysis anticipated the correction, above, and the bulls committed to the moves this week so far as per the chart below: 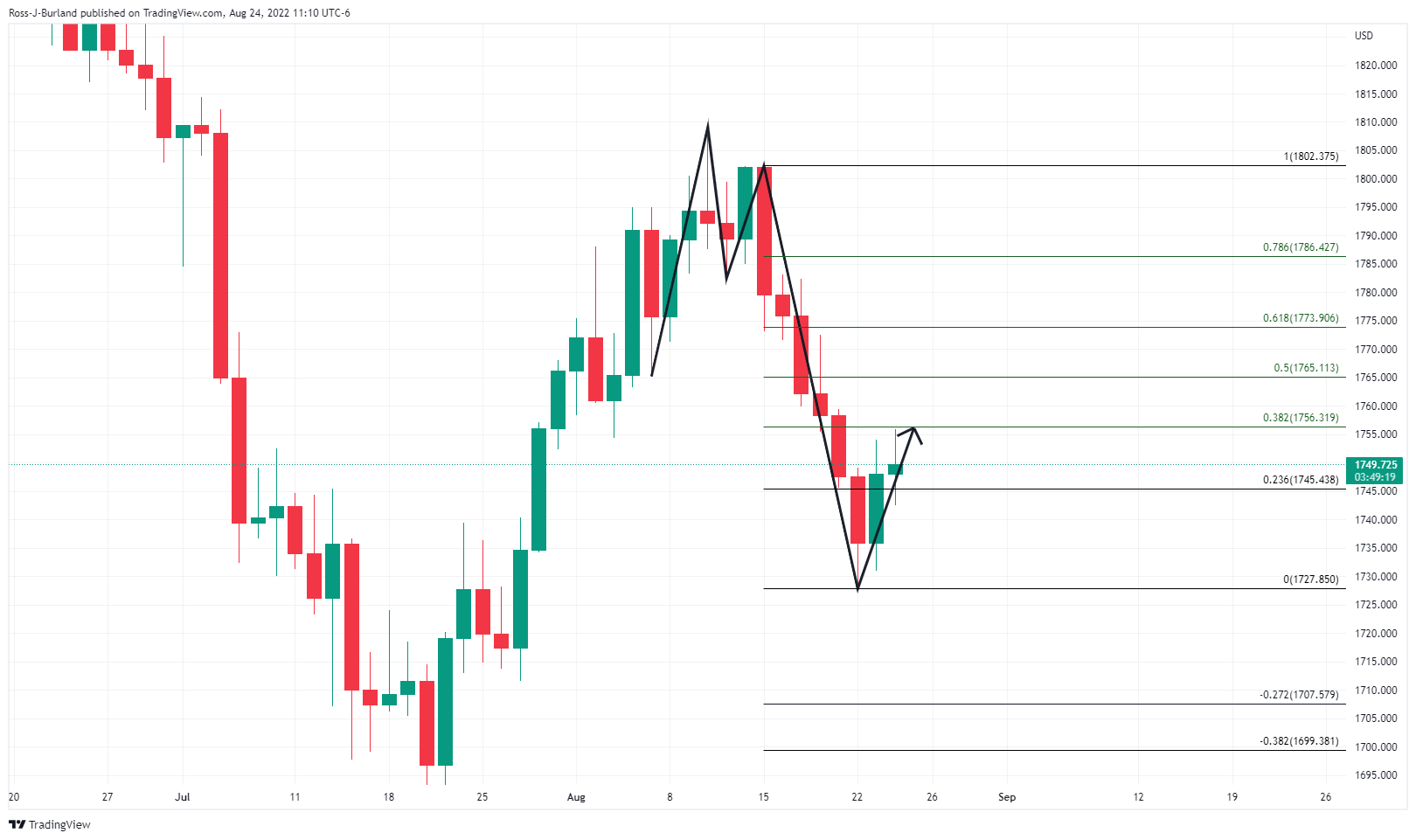 At this juncture, there is every chance of a deeper correction although as the clock ticks down to the Jackson Hole, fundamentals take precedent.