Has US inflation peaked? Five things to know in Bitcoin this week

PM568 > Forex News > Has US inflation peaked? Five things to know in Bitcoin this week

Bitcoin (BTC) goes into another key macro week in the United States with a welcome break to the upside.

After avoiding a now-familiar breakdown around the weekly close, BTC/USD is surging higher at the time of writing on Aug. 8 to once more tackle resistance in place for two months.

Can the bulls win out? Momentum appears to be strong across crypto, but a host of potential stumbling blocks lie in the way.

With fresh U.S. inflation data due, the macro picture could yet upset the status quo, while sellers likewise show no sign of budging to allow reclaim of levels above $25,000.

Amid continued claims that Bitcoin is enjoying nothing more than a “bear market rally,” Cointelegraph takes a look at the state of play on the market as the new week begins.

These five factors will be worth bearing in mind when considering where Bitcoin price action could be going over the coming days.

Unlike recent weeks, Bitcoin allowed traders to breathe a sigh of relief at the Aug. 7 weekly close.

Instead of declining at or immediately after the candle close, BTC/USD instead began gaining, these gains including an impressive hourly candle, which saw almost $500 added.

The close in itself was impressive, constituting Bitcoin’s highest weekly candle close since June — a firm break from the previous weekly downtrend — data from Cointelegraph Markets Pro and TradingView shows. 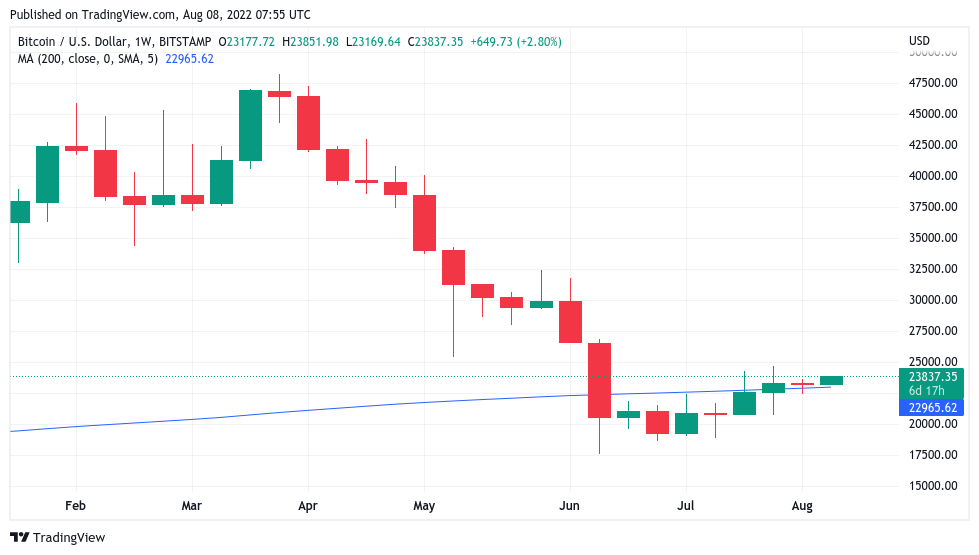 In addition, BTC’s price defended its key 200-week moving average (MA) two closes in a row, cementing the likelihood of that trendline now forming support. This comes despite multiple retests during the week, with the 200-week MA sitting at around $22,900.

Prior to the close, some were already predicting volatility.

For popular trading account TraderSZ on Twitter, this would take the form of a “big violent move,” one which ended up being to the upside.

“I know it’s hard to convince you that $BTC has touched the Bottom. But you can’t ignore it. Never Break This Line in History,” fellow account Jibon added alongside a weekly chart featuring another MA trendline.

Looking at possible targets, anywhere between $25,000 and $28,000, commentators believe, with Cointelegraph already reporting on one trader’s expectations of a $30,000 retest.

“Cycles repeat. Shortly after EMA bands crossing, cycle low is in. From there, the uptrend is close,” it summarized on Aug. 7:

Mid-term target 38k – 40k which be in this descending resistance level area. After this, we'll see a breakout and another bull run.

$40,000, while lofty by today’s standards, is also not without its adherents — even as part of an extended bear market relief rally.

The main macro event in what is otherwise a sleepy summer month is due in the coming days.

U.S. inflation will become top of the list of discussion topics in crypto and beyond on Aug. 10 as the Consumer Price Index (CPI) figures for July hit the radar.

The schedule is already ingrained in the minds of risk asset traders everywhere — while not indicative of a specific trend in and of themselves, CPI releases are reliably accompanied by market volatility before, during and after the fact.

The question on everyone’s lips this time around, however, is whether inflation has peaked.

The decline in commodities is a key cause for optimism for Tesla CEO Elon Musk, as Cointelegraph reported, who used the trend as a basis for suggesting that inflation would be going down from here.

“This could change, obviously, but the trend is down, which suggests that we are past peak inflation,” he said during Tesla’s Annual Meeting of Stockholders last week.

After months of key interest rate increases, meanwhile, the Federal Reserve will not make a decision on further monetary policy moves until September. More broadly, the central bank is in a bind, commentators argue, being unable to hike rates much further without unintended side effects.

According to on-chain monitoring resources, hodlers are unmoved by the latest upticks in BTC price action after months of declines.

While this is nothing unusual, it remains interesting to see how long-term holders’ resolve will be tested should further gains enter.

In automated updates this week, on-chain analytics firm Glassnode noted that the amount of the BTC supply last active in the past 24 hours is declining on average, potentially reflecting a lack of knee-jerk reactions to price moves.

Likewise, the seven-day MA of median on-chain transaction volume reached one-month lows of its own on the day, beating its previous lows from Aug. 1.

On higher timeframes, the trend is also visibly skewed toward pragmatism. The portion of the BTC supply which has stayed dormant in its wallet for three years or more continues to increase, reaching new all-time highs of 38.426% on the day. 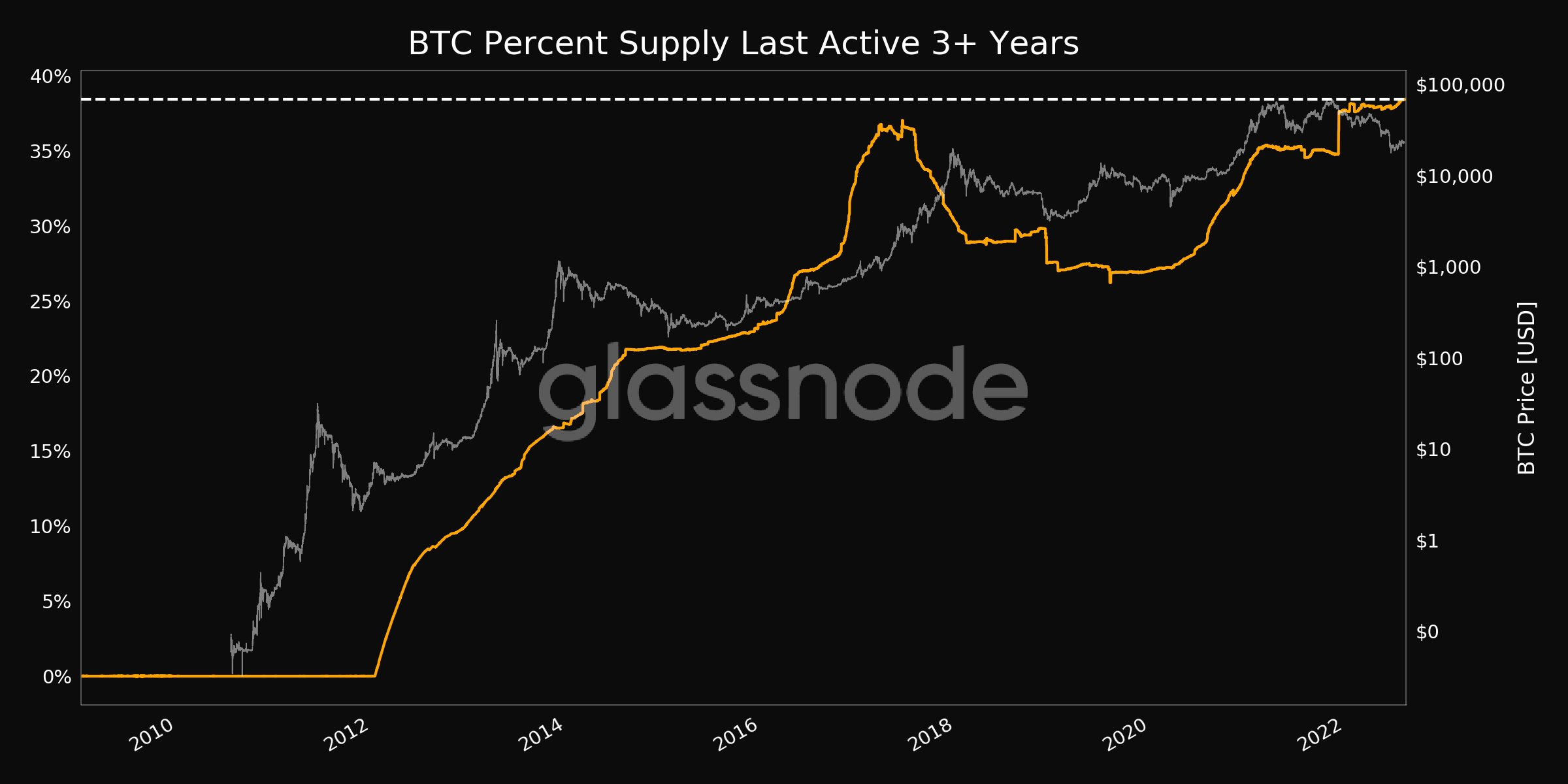 The changes are more easily viewed on the HODL Waves metric, which provides an overview of what proportion of the BTC supply has remained dormant for specific lengths of time.

2022, it shows, has seen a marked increase in coins stationary for between one and two years. 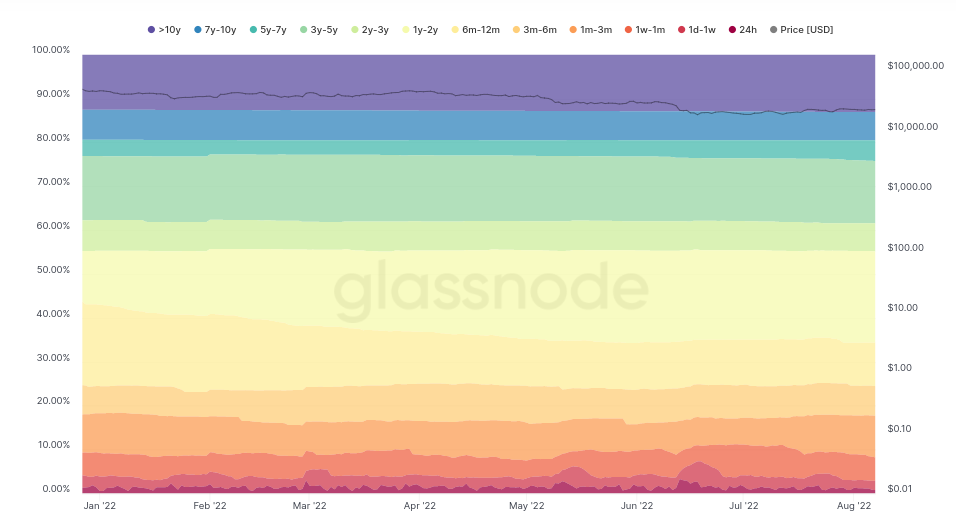 On the topic of hodling, current conditions appear to be firmly lackluster for exchanges amid little genuine interest in buying crypto assets.

Byzantine General further noted a “crazy imbalance” between bids and asks, indicating that the majority of exchange users are waiting for BTC/USD to match its June lows of $17,600.

Data from the Binance order book supplied by on-chain monitoring resource Material Indicators likewise highlights gaps in activity much above $24,000.

This can change quickly, however, as spot price moves up and down its trading range. 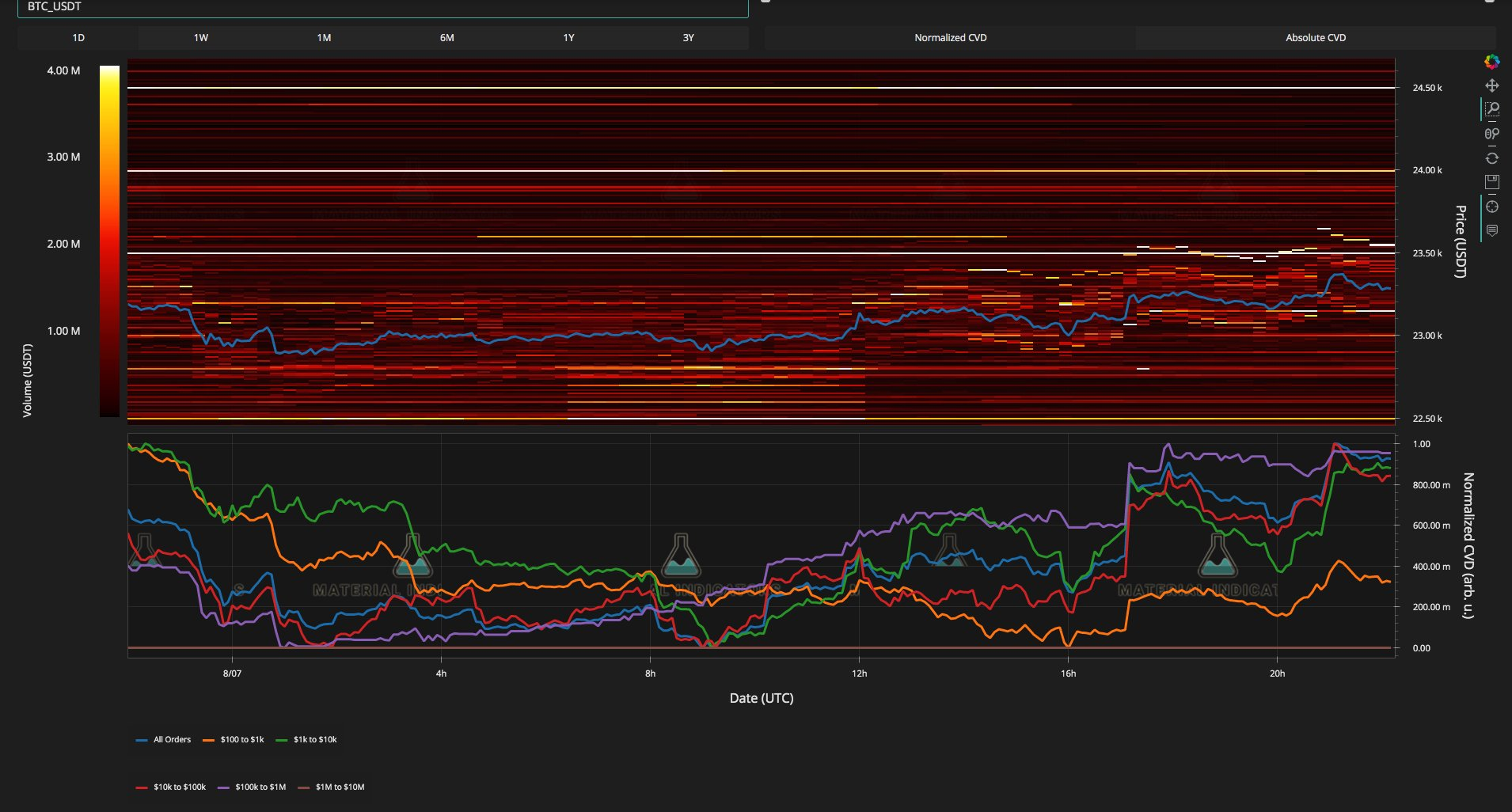 When it comes to the bear market rally, sentiment data may offer an unlikely clue as to whether the true bottom is really in.

As noted by research firm Santiment and macro analyst Alex Krueger, mainstream interest in Bitcoin bear markets in fact tends to peak just after, not before, macro asset price bottoms.

While Kruger contrasted the events of March 2020 with 2009 in the S&P 500, Santiment pointed to social media content relating to Bitcoin around BTC price floors.

Even mentions of classic crypto-crowd terms such as “moon” and “Lambo” peak once the worst of the price drawdown is done, it concluded in findings published last week.

“During the crypto slide in 2022, the crowd has been calling for moon and lambo in a sarcastic fashion whenever prices drop again,” researchers explained on Twitter:

However, the true irony is that spikes in these words are actually often marking moments when $BTC is about to rise. 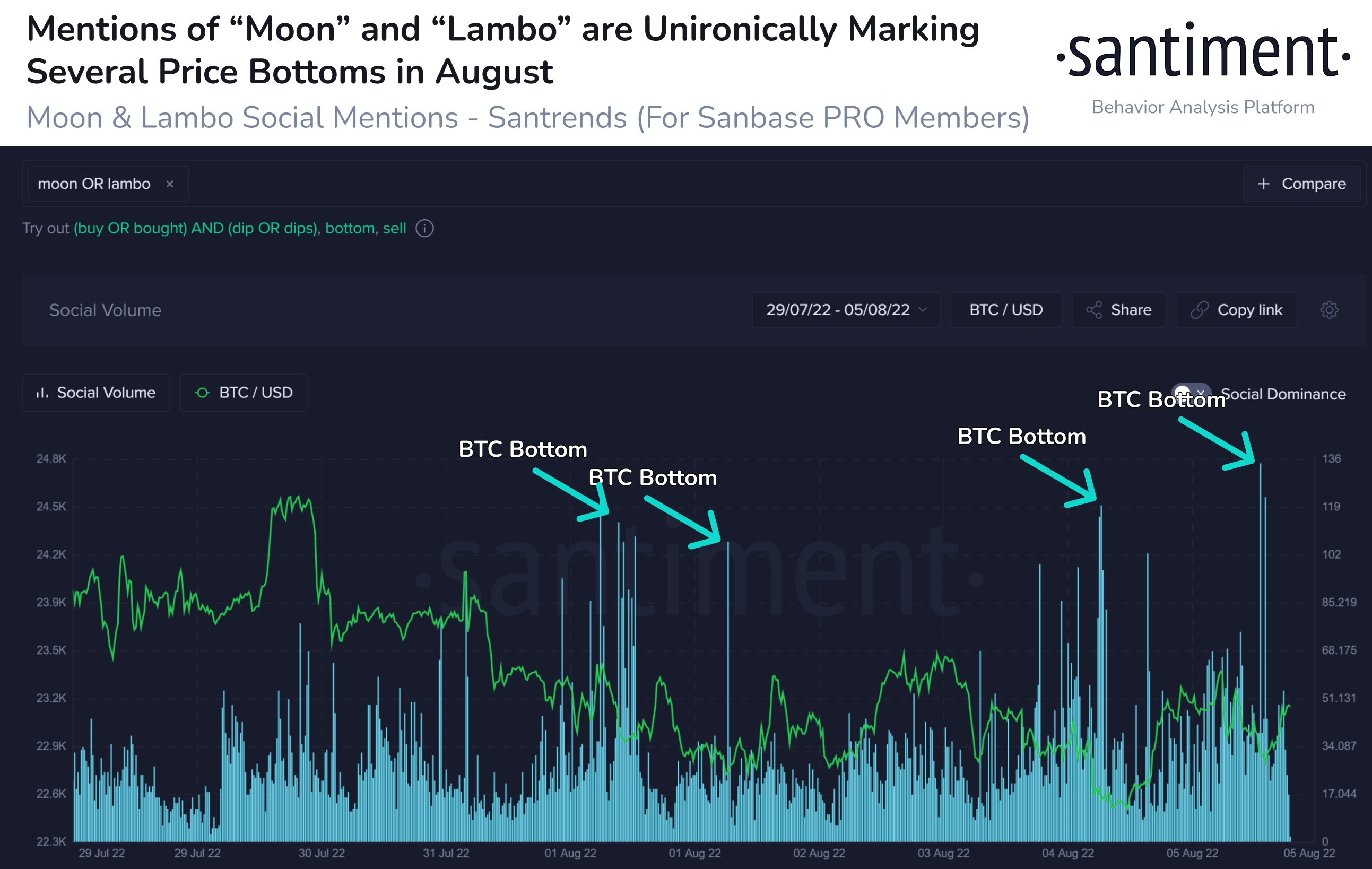 According to the sentiment gauge, the Crypto Fear & Greed Index, meanwhile, support is building above the market’s “extreme fear” zone, which has been absent since mid-July.

The Index measures 30/100 on Aug. 8, unmoved versus the day prior and representative of “fear” being the overall market mood. “Extreme fear” corresponds to a score of less than 25.