Will Bitcoin price ruin Ethereum’s Merge or will ETH suck volatility out of BTC?

Bitcoin price produced took a massive and sudden U-turn after the US Consumer Price Index (CPI) data was announced on September 13. Although the CPI decreased from 8.5% to 8.3% year-on-year, it was higher than the expected rate of 8.1%.

This discrepancy caused the S&P500 and Nasdaq to crumble. Bitcoin price took a cue from this sell-off and pulled a similar move. Regardless, all eyes are on Bitcoin as it could ruin the highly-anticipated Merge scheduled to occur on Ethereum.

After this successful update, Bitcoin will be the only Proof-of-Work coin among the top 10 largest cryptocurrencies based on market capitalization.

Bitcoin price has produced a string of lower highs and lower lows since November 10, 2021, denoting the persistence of a macro bearish outlook. Although BTC attempted to break out of this trend between June 18 and August 14, it failed.

The 43% run-up was BTC bulls’ attempt to set a higher high. Instead, it set a swing high at $25,209 and triggered a sell-off. Although Bitcoin price catalyzed another rally, it set a lower high at $22,800, revealing that the downswing since $25,209 is still in play.

After the CPI announcement on September 13, Bitcoin price has shed roughly 10% in a single twelve-hour candlestick and is currently hovering around the $20,000 psychological level. If this bearish momentum persists, BTC could produce a lower low below the immediate swing low at $18,497 formed on September 6. However, market participants should also note that Ethereum's highly-anticipated Merge upgrade is scheduled to go live in under two hours. This event could sway the spotlight to ETH and other relevant coins, leaving BTC to consolidate in a tight range.

After this move, investors could stay on the sidelines to see if Bitcoin price is ready for a new macro swing low below $17,570. If successful, it would indicate a continuation of the macro bearish outlook. 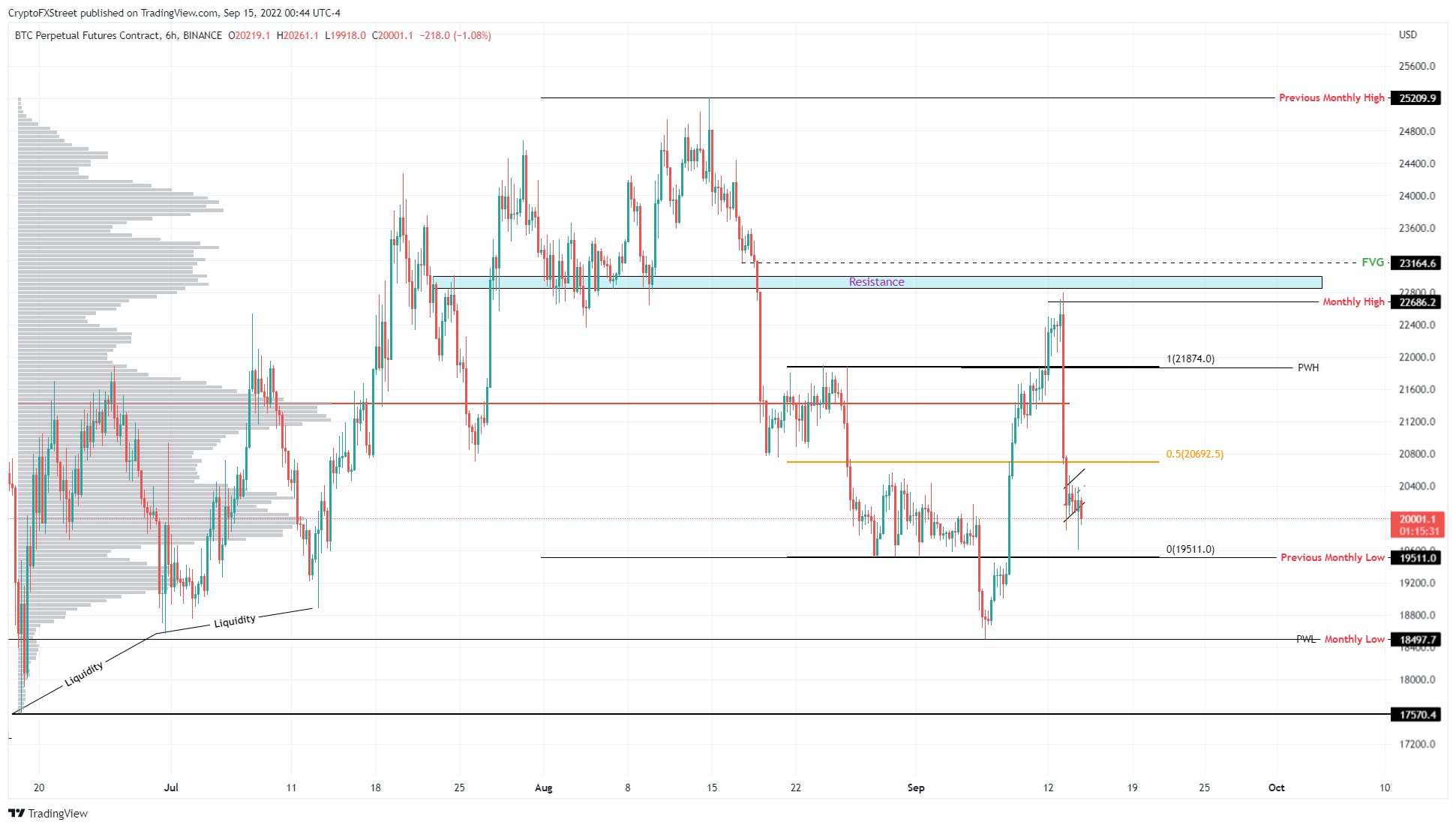 On the other hand, if Bitcoin price produces a daily candlestick close above $25,000 and flips it into a support floor, it would create a higher high and invalidate the bearish thesis. This development could also catalyze the sidelined buyers to jump in and create a positive feedback loop, which could propel Bitcoin price to retest the $28,000 hurdle.