With several on-chain metrics for Bitcoin (BTC) still in a bearish range, a continuation of the recent price recovery will require increased demand and fees spent over the network, says Glassnode.

The assessment of mediocre market growth over the past week came from blockchain analysis firm Glassnode in its latest “The Week On Chain” report on Monday.

In it, analysts pointed to sideways growth in transactional demand, active Bitcoin addresses remaining in “a well defined downward channel” and lower network fees as reasons to temper investors’ excitement about the 15% spike in BTC price over the past week. However, BTC is currently down 2% over the past 24 hours, trading below $23,000 to $22,899, according to CoinGecko.

The report begins by highlighting the characteristics of a bear market, which includes a decline in on-chain activity and a rotation from speculative investors to long-term holders. It suggests that the Bitcoin network is still demonstrating each of those traits. 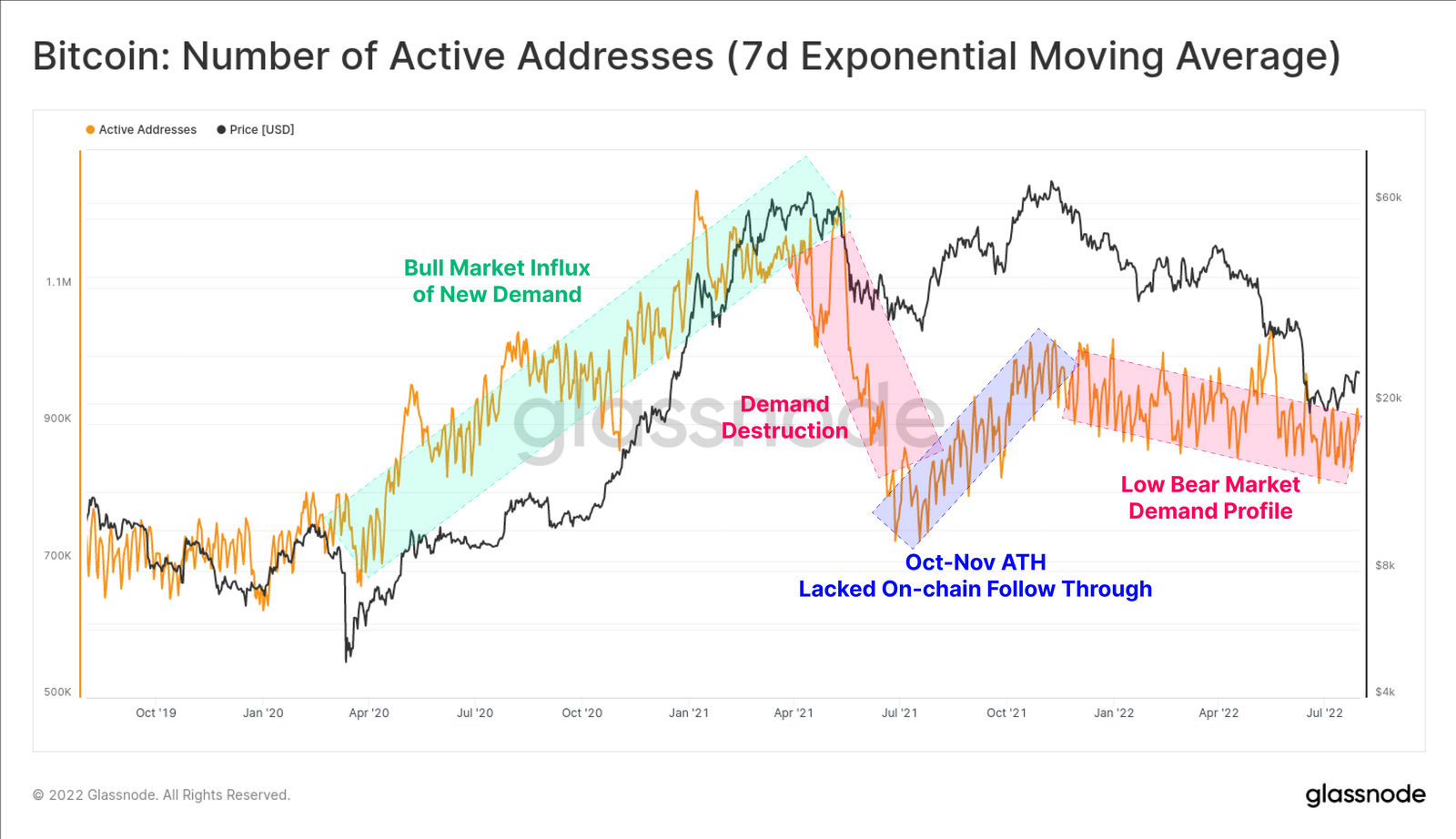 Glassnode wrote that a decline in network activity can be interpreted as a lack of new demand for the network from speculative traders over long-term holders (LTHs) and investors who have a high level of conviction in the network’s technology. The report states:

With exception of a few activity spikes higher during major capitulation events, the current network activity suggests that there remains little influx of new demand as yet.

In contrast to last week, when a significant level of demand appeared to be established at the $20,000 level for BTC and creating a floor, the additional demand needed to sustain any further price increases is not observable. Glassnode refers to the steady decline in active addresses as a “low bear market demand profile,” which has been in effect essentially since last December.

The analysis observed similarities between the current network demand pattern and the one established in the 2018-2019 period. Similar to the previous cycle, network demand dried up after the April 2021 all-time high in BTC price. There was a notable recovery in demand leading up to the following November as prices recovered to a new ATH.

However, since last November, demand has been on a downward trend, with a major spike down during the mass sell-offs in May:

The Bitcoin network remains HODLer dominated, and as yet, there has not been any noteworthy return of new demand.

Glassnode added that the poor demand from anyone other than dedicated Bitcoin enthusiasts is forcing network fees into “bear market territory.” Over the past week, daily fees amounted to just 13.4 BTC. By contrast, when prices reached ATH last April, daily network fees topped 200 BTC.

Assuming fee rates increase to any noteworthy degree, Glassnode suggests that it could mean demand is on the rise, helping to sustain further “constructive structural shift” in Bitcoin network activity:

Whilst we have not seen a notable uptick in fees yet, keeping an eye on this metric is likely to be a signal of recovery.