Fed’s Kashkari: Fear in back of mind is that inflation is more embedded at higher level than appreciate

PM568 > Forex News > Fed’s Kashkari: Fear in back of mind is that inflation is more embedded at higher level than appreciate

Federal Reserve's Neel Kashkari is crossing the wires with his comments dripping through throughout early Asia.

His pivot on his outlook for rates impacted recently when he said the ''Fed is far, far, far away from declaring victory on inflation'' following the recent surprise fall in inflation data. This is when prices rose 8.5% on an annualized basis in July, a slower pace than the 9.1% rise reported in June and below analysts' consensus expectations for an 8.7% rise.

Half to two-thirds of US high inflation is driven by supply-side shocks.

There is some evidence supply chains are beginning to normalize.

We need to get some help on the supply side to get inflation down.

The more help we get from the supply side, the less fed has to do and better able to avoid a hard landing.

We need to make sure the underlying inflation trend gets back down to 2%.

Right now there is no tradeoff between employment and inflation mandates.

If inflation was at 4%, I would be more willing to say let's take our time, and avoid the risk of overdoing it.

With inflation at 8% or higher, we don't want to allow inflation expectations to unanchor.

We can only relax on rate hikes when we see compelling evidence inflation is heading toward 2%.

Fear in the back of the mind is that inflation is more embedded at a higher level than appreciation.

A lot of balance sheet tightening has already happened due to forward guidance.

The biggest fear is that we are misreading underlying inflation dynamics.

Old news has failed to move the needle and the greenback remains pressured albeit within a bullish correction on the lower timeframes: 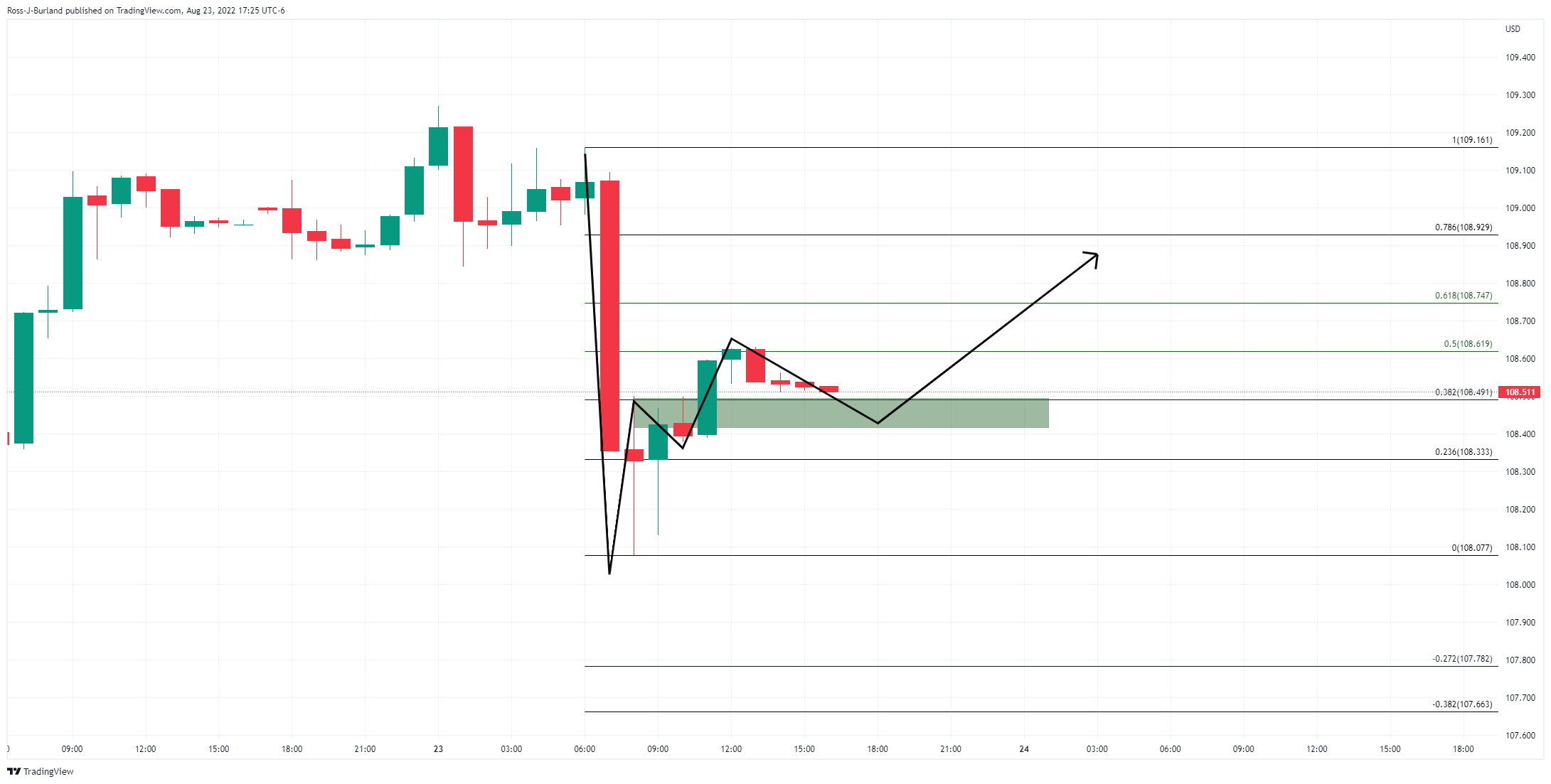 The overall picture is that the Fed has hiked rates from near zero in March to their current range of 2.25% to 2.50%, with more expected in the months ahead.

Kashkari has flipped more hawkish as of late as the Fed tries to tame inflation, which is running near a 40-year high.

However, while WIRP suggests a 50 bp hike is fully priced in for the September 20-21 FOMC meeting, the odds of a 75 bp hike could start to dwindle and weigh on the greenback, reviving the bull's hopes elsewhere.

Nevertheless, analysts at TD Securities argued that with regards to the Jackson Hole that is coming up later this week,  the Fed's Chair, Jerome Powell's speech ''will likely aim to reinforce the message that multiple, sizable hikes are still in the pipeline, and easing should not be expected to be on the horizon anytime soon.''

Meanwhile, we were seeing a bid back into the greenback and US yields following today's bullish 2-year Treasury auction.

The demand from domestic and international buyers is far below a 6-month average which has seen the 2 and 10-year yields rally, supporting the US dollar and weighing on gold prices in the recent hours since the auction: